The Coastal and Estuarine Ecology Lab 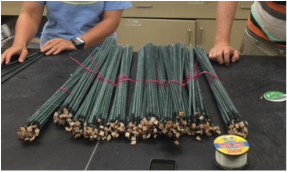 Squid pops assembled and ready to be deployed in the field.
TAMUCC has recently joined the Smithsonian Institution’s Marine Global Earth Observatory (GEO)!  Marine GEO is a global network of institutions that is collecting biodiversity and ecosystem process rate data in shallow coastal ecosystems.  This network will serve as a platform for coordinated global experiments and observing trends in biodiversity.  The Patrick Lab has been instrumental in bringing Marine GEO to TAMUCC and has been working closely with the Smee Lab to develop the program locally.


In 2016, Patrick Lab and Smee Lab members collected predation rate data in Oso Bay, Laguna Madre, and Aransas Bay as part of the global “Bite Map” experiment lead by SI Marine GEO.  In order to gather this data, graduate students and volunteers placed “squid pops” (garden stakes with squid bits tethered to them) inside and outside of seagrass beds and measured the rate at which the squid bits were eaten.  Seines were used to catch fish in order to get an idea of what species of fish were in the area at the time.  Data are being uploaded to the global dataset to contribute to a global map of predation rates in coastal waters.

In 2017, there were several major developments to the TAMUCC MarineGEO program.  TAMUCC entered into a partnership with the University of Texas Marine Science Institute (UTMSI) to jointly support the program under the name MerinGEO Texas.  Dr. Patrick and Dr. Smee led the first year's sampling charge within the framework of a new class at TAMUCC designed to teach students about field ecology methods while collecting and contributing meaningful data to the global MarineGEO effort.

Now that the program is in its 3rd year, we've found our stride and exciting things are on the horizon.  We participated in the PANAMEX experiment testing the effect of latitude on top-down control of fouling communities and are gearing up for the first meta-genomic bioblitz in Summer 2019!  To learn more, check out the Smithsonian website and the MarineGEO Texas website.